Pray Style (Korean: 프레이 식) is a unique offensive, wave-based martial arts style that is already considered as superhuman. Pray Mayer created the style by improving upon the techniques of Mayer Style and incorporating its basic fundamentals. Pray Style is a highly fluid and offensive style that utilizes Wave Techniques, rapid movements, and allows one to adapt to their opponents by combining speed and strength. It is best described simply as overwhelming power.

Learning Pray Style is incredibly difficult as it pushes one's limitations to the extreme. Users are physically and mentally subjected to intense pain as the techniques would inherently require overtaxing the normal capacity of the human body. As a result, users experience severe physiological and anatomical changes due to the excessive demands of practicing Pray Style.

During the Arin Recovery Campaign, Dry demonstrated his self-made Mandala special attack which incorporated the theoretical concept of Pray Style into his Leonhard Style.

It was revealed in the Extra Episodes of Another Episode-2 A Village Where You Are that Master Knight Leo accomplished the Revised Pray Style under the tutelage of Anne.

Pray Style was developed from Mayer Style by improving on the efficiency and effectiveness of the latter's techniques thereby allowing a far greater amount of force to be produced with each strike. Pray Mayer, who founded the Pray Style, was first properly taught martial arts by her adoptive mother, Karen Mayer, in the Mayer Style dojo in Planet Tao. Pray then quickly mastered all the techniques of Mayer Style - brutally defeating all of the dojo's students along the way. She then also defeated Karen as the dojo master before declaring that Mayer Style is too weak. By introducing a strong focus on speed and strength, Pray released the limits inherent in Mayer Style due to the standardization made for it be to be easier to learn.

Pray then created her own unique martial arts using Mayer Style as the basis to protect her miracle child/adoptive sister Anne Mayer. It was also implied that Pray used the style to cut off their dependence from their adoptive mother. Anne was then inducted as the first disciple of Pray Style under the direct guidance of Pray.

Pray Style remained incomplete until the Battle of Velchees, in which Pray and Anne jointly finished the style by mastering the Resonance Wave Technique used to fight against Cross Eye Alpha and Beta. They also incorporated team tactics into the style so that other combatants can effectively cooperate with Pray Style users as a cohesive unit. During the battle, fellow Master Knights Dry Leonhard and Lea Zail were able to team up with Pray and Anne in fighting against overwhelming number of Beasts in Velchees.

The main underlying principle of Pray Style is swift, overpowering victory regardless of the situation. Pray Style can be used against any and all kinds of opponent or opponents even at the same instance. Its combat style is compatible to both bare-handed and weapon-based fighting as it would ultimately result in creating highly powerful waves. The combat philosophy of Pray Style can be summed up as "the best defense is a good offense" and thus would favor initiating aggressive attacks before the opponent.

Pray Style grasps the phenomena of victory. As such, it can be modified by its user to draw out the best of his/her abilities while simultaneously beating opponents and other challenges. There are as many uniquely different versions of Pray Style as there are its practitioners. Pray Mayer's individual form emphasizes the immenseness of her sheer raw power through heavily lethal one-hit-KO moves. Whereas, Anne Mayer's own form greatly focuses on nimble dual wielding to compensate for her relatively weaker strength. Pray and Anne jointly customized their Pray Style during the Battle of Velchees to maximize coordination and combined attacks with each other in order to defeat Cross Eye Alpha and Beta in paired team fights.

While the style heavily focuses on the utilization of AB Swords against Beasts, Pray Style incorporates a variety of fighting techniques and forms. Officially, Pray Style spans six styles of martial arts:

In addition to fighting styles, Pray Style places heavy emphasis on battle theory and tactics. Pray and Anne mastered joint tactics during the Battle of Velchees in order to win against opponents that far outclassed them in combat - specifically, Cross Eye Alpha and Beta. During this battle, they also incorporated team tactics into the style in order to further accommodate multiple Pray Style users and other non-Pray Style combatants to function as a single, cohesive unit. In Main Episode-3 Door, A-10 and four of Anne's disciples utilize team tactics to fight against an overwhelming number of Chimeras.

The emphasis in battle theory and tactics played a role in creating three known variants of Pray Style:

Revised Pray Style (Korean: 프레이 식 - 개) is a modified form of Pray Style, originally developed specifically for Anne Mayer, but has since then been used by most Pray Style practitioners.

Pray Style was developed by Pray Mayer with the intent that it would be used by her only. As such, Pray, who possesses super human durability and battle prowess, can endure the raw power of the style, whereas, a typical practitioner that lacks Pray's small stature and physical prowess is unable to utilize the original Pray Style efficiently. While anyone can technically utilize the original style as long as the user possesses the necessary knowledge and dexterity, he or she will undergo significant strain in the process of doing so. The extreme nature of the original Pray Style made it practically unusable to people other than Pray. Therefore, Anne, with the help of Garou Rata, modified the original style so that she can overcome this difficulty and eventually use Pray Style at par with Pray.

The techniques and stances of Mayer Style form the basis for the vastly elevated movements of Pray Style. Its strikes commonly break DC Coats and Barriers. Users can already slay low rank Beasts with their bare hands. The essence of Pray Style techniques are centered on producing concentrated waves that are applied through contact or directed as a projectile. Waves in Pray Style are used either as offensive strikes or as defensive parries. As an attack, waves have an effect similar to that of an explosive burst, or an extension of a blade or punch. As a counter, waves resonate in a direct opposite manner that cancels out or negates incoming attacks. Pray Style also features non-waves techniques but the effect is still superhuman compared to a normal strike.

Pray Style seems to lack grappling holds and defensive maneuvers but it compensates for this by making its user highly agile to evade attacks, gain advantageous positions, and lay down quick but precise strikes. The body of users eventually become very durable through the sheer harshness and rigorousness necessitated in mastering the style. The disciplined training for Pray Style also develops a sharp mental state that allows for flexibility to adapt then overcome challenges.

Pray Style heavily revolves around techniques which produce mysterious energy-based propagating forces known as Waves. These waves are actually densely clustered Ki manifested and manipulated by Pray Style users. Three "colors" of the Pray Style wave were shown in the series so far: Red/Crimson, Blue, and Black. It is possible to combine the colors to produce a special wave known as Resonance. Combining Red and Blue waves creates the Resonance wave Violet. Each color of the Pray Style wave has its own unique properties that can neutralize the effects of Phenomena Weapons and overwhelm Paranormal Powers. The difficulty in mastering Pray Style is chiefly because its techniques are wave-based which are naturally impossible for the normal human body to project. Though there is no official rank and grading in Pray Style, mastery of the different wave colors is widely seen as the style's hierarchy and progression scale: Blue and Red/Crimson are the basics, Black is intermediate, and Resonance/Violet is advanced.

Waves can potentially neutralize other waves when they collide with each other. It must be noted however that doing so is fatally dangerous as the counteracting waves do not dissipate their potential energy, instead the collision causes a massive explosion/shock wave. Anne demonstrated that she can redirect/"slice" through wave attacks by imbuing her weapon with Black waves.

Certain objects such as AB Sword Number 5. V can amplify the use of wave techniques in Pray Style. Pray developed a uniquely special wave attack that can only be done with the use of V's Masterpiece ability. This was showcased during her epic fight as Queen E-34 against Anne.

Pray Style was initially only used exclusively by Humans but certain Beasts of Queen E-34 have also used the style since her appearance in CC 430. It is unknown whether beasts in general have thereafter gained Pray Style. 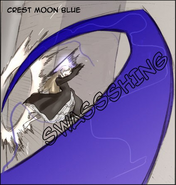 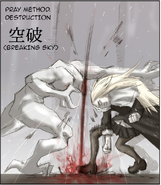 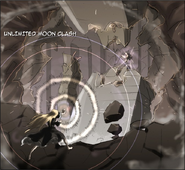 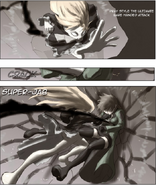 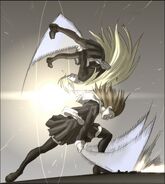 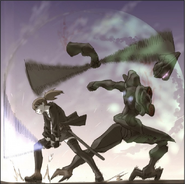 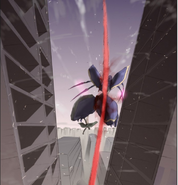 Spin of the Sky the Second technique

Anne breaking through a Paranormal Power 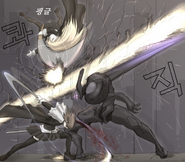 Pray and Anne executing a combo attack with Pray Style 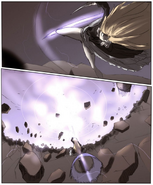 The sliced Blue wave is split into four beams

Pray executing a uniquely special wave attack that can only be used with Number 5. V

Fear using Blue Spear during the Battle of Valtia 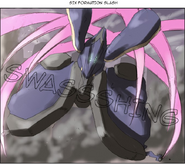 ME0-Ch4
"The fundamentals of Pray Style are very simple. It channels pure power to blow away all attacks or defenses of the enemy."

ME0-Ch15
"Many get wrong about Pray's power, but this isn't a Paranormal Power. This is her karma she acquired as a human, "MU". It's the strength she gained by training day by day endlessly, accumulating her "MU". She learnt human wisdom and experiences, upon which she devised her style, adding her karma. There might be an extent of her natural ability capacity, clever methods and creativity, she spent sufficient time to acquire these. The power she perfected with humanity's wisdom and training. What gave her the power she didn't have... was the earnest wish and all those days she spent training. That's probably the expression of her life in which she struggled so hard to protect 'someone'."

ME0-Ch65
"Pray Style Wave Attack is only just a method to dominate other Paranormal Powers or skills. Pray Style's essence is a sword attack which combines her experience, Chi, mind and body and explodes all of them in a split second. The attack crushes everything, even including a high strength AB Sword. Her style rarely reveals its essence because no sword can hold her power within one piece."