Pray Mayer (also translated as Pray Meyer or Pray Meier; simply known as Pray) is the female human identity of Beast Queen E-34. She raised herself to live alone but soon found the importance of human companionship through her relationship with Fiona and the guidance of Milo Leonhard. Pray is the legal adoptive sister of Master Knight Anne Mayer however the series eventually reveals that Pray is actually Anne's biological mother.

Pray was a Master Knight of the Central Order, a Zero Breaker, and the Top Sword of the entire Knight Order. She was also one of the 7 Heroes of the Velchees War and was popularly regarded as the "greatest/strongest" Knight to have ever lived. Pray committed two separate murders on fellow Knights which led to her career's downfall and public disgrace. Her status was revoked to a mere Knight Apprentice but Pray showed no signs of regret nor care for these repercussions. Many who followed her rise as a Knight were disappointed as they believed that Pray could have ended the Human-Beast conflict and bring about the Age of Humans.

Pray was controversial for her open hostility against anyone except Anne. Simultaneously, she was also infamous for her peerless power and potential. Pray still holds the Knight Order's highest record for number of high rank beasts slain as well as victories in competitive Knight duels. Even senior Master Knights were not able to defeat Pray nor even hope to. This led to a routine wherein top Knights would give various excuses from having matches against her just so they can save their reputation.

Since revealing herself to be Beast Queen E-34 in CC 430, Pray is currently recognized as the "worst threat" to humanity. The outbreak of the War of Prayer, initiated by her, pushed humanity to the brink of destruction and prompted major shifts in all aspects of life in the Knight Run universe. Still, Pray's existence as a human being and as a Knight was preserved by the Leonhard/Knights-led Alternative League to cover-up the fact that one of their own caused such an extreme disaster.

Pray is one of the main characters of Knight Run and notably started the series' story with her war. The entire Main Episode-0 Pray revolves around her and her relationship with Anne. Despite presumptions that she was already killed by Anne after their epic fight during the Third Battle of Arin, Pray's ultimate status is still left uncertain as her body was retrieved by EX-Type Zero Fear and then brought to the Beast Graveyard. In Main Episode-1 Hero, Pray repeatedly appears as visions haunting Anne.

Pray appears as an extremely petite, slim, and prepubescent girl. She has wavy, knee-length blonde hair, pale skin, and red eyes. A notable feature of Pray is that her pupils are vertically slanted (similar to a cat), as opposed to a normal human's circular pupils. When in active combat, Pray's eyes also do not "transform" unlike other characters who undergo physiological changes as exemplified in the pattern, shape, and/or color of their irises. This may imply that Pray is always in a powered-up or combat ready state. Milo Leonhard notes that Pray has a wide forehead just like him.

Pray initially wore cute dresses that are seemingly for children which give off the false impression that she is meek, innocent, and frail. After Anne's departure from her, Pray swapped the cute motif for a more mature one and began applying make-up on herself. She now appears to be more conscious of her looks and femininity.

Due to her stature and appearance, many have thought that Pray has either stumped growth, hormonal abnormality, or unaging qualities. However, Pray exhibited signs of physical maturity, especially when comparing how she looked during the War of Prayer vis-à-vis from Anne's childhood memories. This shows that her body simply ages at a much slower pace compared to a normal human.

On the surface, Pray appears to have a Darwinistic view on life. She seems convinced that only the strong, such as Anne and herself, should survive while the weak must be left to struggle on their own. This struggle would then force the weak to grow stronger or otherwise be fodder for the growth of stronger individuals. Although Pray do not understand why Anne always risks herself in the service of others, she still followed Anne to become Knights. As the plot progresses, it is then shown that Pray actually has a warped love for Anne bordering on unhealthy obsession. She believes that anything and everything is worth it if done for Anne's sake. This is the primary root of her psychopathic behavior.

Pray is easily provoked when Anne is involved. She immediately joined the Knight Order just so she can always be by Anne's side, literally. Pray reasons that this is to ensure Anne's safety at all times as she wholeheartedly believes that only she is worthy to be close to Anne and provide her real happiness. Pray can also be manipulative and jealous of Anne's friendliness to other people. To this end, she would go so far as to inflict harm to repel others from approaching Anne or herself. However, she is also capable of tolerating certain individuals, such as Milo and Jill, but this is due to the intercession of Fiona and Anne, respectively.

As long as she has her Anne, Pray is firmly decided that she has no need for anything or anyone else. Both of her murders were derived from this twisted logic but Pray usually checks herself as she is fearful of losing Anne's love. She has made attempts to be "kinder" to Anne's close friends and to act as a proper Knight saving other people, as these merit the approval of Anne. Anne acts as Pray's "constant" which keeps her ego stable, staving off the erupting Beastly nature inside of her. Without Anne, Pray's innate Beast mentality would consume her and result in disastrous consequences as seen from the events of Main Episode-0 Pray

Eventually, the series reveals that Anne is the actual self-materialized wish of Pray - a wish to have her own friend who would be with her forever and to whom would be her life's purpose. Pray's actions were then rationalized as simply to protect and cherish her precious wish. The traumatizing loss of Fiona also spurred Pray to protect and treasure her wish even if she has to be brutal and excessive.

In a more comical note, Pray treats all other matters not concerning Anne as a non-issue regardless of how pressing or important it is. During their Knight training days, Pray would not take their field combat exercises seriously and views such deployments as more of a field trip or camping opportunity. She even stuffed her backpack at one point with nothing more but snacks instead of proper equipment, although it could have been a ploy so that she would end up sharing a sleeping bag with Anne.

Due to Pray's Beastly nature, she is naturally endowed with hyper enhanced strength, agility, reflexes, and senses that are already considered beyond superhuman and grossly disproportionate to her small-sized frame. She is seemingly also a prodigious genius who can quickly absorb or learn anything that piques her interest.

Pray is an expert master of Mayer Style as she was trained personally under the renowned Karen Mayer who was her adoptive mother and the style's reformer. With Mayer Style as her foundation, she soon developed her own martial arts, Pray Style, which is far superior and more potent than its original basis. It is thanks to these disciplines that she was able to refine her Beastly attributes and turn herself into a deadly living weapon. Even after the War of Prayer, Pray is still widely recognized as one of the most powerful, if not the most powerful character, in the entire Knight Run universe. Proof of her dominating power is the fact that she was recognized by Mother Knight herself as the Top Sword immediately upon graduating as a Knight Trainee.

Pray can overwhelm her opponents no matter what, regardless of category, weapon, or conditions; she can still wreck her opponents barehanded. Anne Mayer is the only human character capable of matching Pray but her yearly win record against her is at a paltry 3% - still, that record is better than everyone else's in the Knight Order. During the epic fight between Anne and Pray, the latter was only at 30% of her strength due to exhaustion from "spawning" EX-Type Zero Quatro and other high rank beasts. Nonetheless, Pray managed to destroy huge portions of Core Temple in the course of their fight. Cross Eye Alpha and Beta seemed to be a match against Pray as well, although this was when she was still in the process of refining her Pray Style.

Pray wields AB Sword Number 5. V whose Masterpiece ability further enhances the wave techniques of Pray Style. Using V, Pray developed specific techniques that can only be used specifically in conjunction with her sword. She also further developed the use of waves to discover Black waves, as well as the resonance method to create Violet waves which are combinations of Blue and Crimson/Red waves.

(Pray justifying why she would not make other friends besides Anne)
Pray: "As long as I have Anne, I don't need anyone else"

(Pray and Anne's clashing mentalities)
Anne: "Human beings...will they survive?"
Pray: "I don't give a damn. It's either kill or be killed. One or the other. I prefer to kill. No, the extinction of human beings would not be bad I guess. Nobody's gonna bother me and Anne."
Anne: "Monsters [Beasts] don't bother you?"
Pray: "Ah, right but I'll protect you Anne. I don't care if the others die or not."
Anne: "Then I'll have to protect the others. That's not a bad trade."
Pray: "You fool. That's a bad trade for me." [2]

(On Anne's overburdened sense of guilt and martyrdom)
Pray: "Don't go too far. If you only look at others all the time...I'm afraid you won't see me someday. I'm scared." [3]

(Pray's promise to Anne after her departure)
Pray: "Anne, I will be waiting for you at the garden until the time comes" [4]

(On Pray and Anne's co-dependent existence)
Milo: "Dry...to me, they are not heroes, or Knights, or my students. To me, I still see them as the poor kids who used to beat up our church orphans to steal their food. They were always holding each other's hands. That never changed. Just like before, even when they entered the Knight Order, they never let each other's hand go. I fel bad for Roland [orphan whose food got stolen] but when I look at the, I just thought there was nothing I could do about it..." [5] 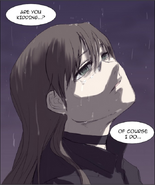 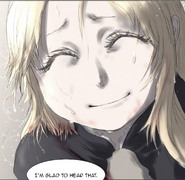