After the Arin attack, mankind lost its leading institution, the Central Order, which had the Mother Knight herself as the mastermind. With this crisis, other organizations suddenly became indecisive about taking action against the Beasts. Perceiving this situation Dry Leonhard decided to take control and form a New Alliance in order to save the human race.

ME0-Ch15 - Dry and Daniel Leonhard talk:
Daniel - "I persuaded the Valtia Southern Defense Force. Such types are easily done with a bit of emotional side".
Dry - "But, we still lack the fleet".
Daniel - "What about the armies and defense forces still hesitating or bound by pacts?"
Dry - "Not only the Order, AE is also hesitating to decide without the Central Order. In this time, we better act and gather the necessary forces, whatever the regulation or so, then the others will follow us. We can get permission somehow afterwards. We gotta act now".
Daniel - "Isn't it that madam Anne's style? I don't like this. Dad... No, father will be here soon."
Dry - "And West?"
Daniel - "Liutenant General Thain will join us, despite the opposition of the ministry. Chief Feizer of the North is heading this way".
Dry - "Good. With two Chiefs we have more authority".
Daniel - "Is this really okay Deputy Chief?"
Dry - "I don't care if there's an accusation later. We will be finished if we are late. I don't intend to see us hesitating about laws and other shits. I will propose a temporary knightly order union, and hold a round table. I will be center for them. We gathered them this much, they have no choice but to follow me".

Later in this chapter, Dry makes a speech to the general public:
"I am standing here, even by breaking the laws, as I have made an important decision. I believe the time has come to think about what to do. For your family, friends, those who you love. The Central Knightly Order, which had protected out lives till now, has been completely annihilated. And I... came here to tell you that we must fight".

So then, Dry gathered the Knight Order leaders and they had a round table to discuss the New Alliance. From ME0-Ch16:
"There are still some problems, but let's stick to this plan. From now on, the Order and each allied force will act upon new temporary protocol without Center's input. Although the authority of this round table and the reliability of the protocols are questionable, these measures will gain Dry the support of the public. As result, those indecisive planetary representatives will follow us, too. And this round table decides that Dry Leonhard of the East shall lead the War of Arin on behalf of the missing Mother Knight".

The initial plan was to use the secret bunker "Garden of Eden" on Valtia as a base and coordinate a reconquest war in Arin with help of the Zeppelin. However, the Battle of Valtia and on other planets caught them by surprise and reduced considerably their warfare capabilities. With the imminent Ice Age in Valtia and other planets (as a result of Fear's Morglay), Dry focused on the evacuation of civilians rather that a immediate counter attack. His leadership was very important as for maintaining a minimum of social stability. The situation was grim: millions of people were left behind to die because there was simply not enough evacuation ships.

So in ME0-Ch24 Dry makes a decision: "At this time, attacking Arin will no doubt fail, thus we will focus on defense and restore government first. For at least 3 months until a New Alliance is formed and matters have sorted out... We will abandon Arin. I will take your silence as an agreement. The New Alliance will separate according to its respective planets, and a minimum number of knights will form the E-34 task force, continuing its primary mission. Then we will end this meeting". 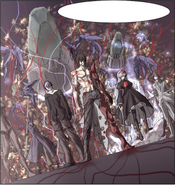