Knight Run Wiki
Register
Don't have an account?
Sign In
Advertisement
in: Articles under construction, Characters, Knights,
and 5 more

Milo Leonhard (or simply, Milo) is a retired Master Knight and now an instructor in the Knight trainee academy at Central Order on Arin. He cares about his students and seems to be a good teacher. His personality is funny and he frequently makes jokes by mocking himself. He is a rather perverted person sometimes and in ME0-Ch6 it's implied that he has a "paid lover" in Arin. He fought alongside Dry Leonhard in the Battle of Velchees. ME0-Ch29

Milo knows Pray since she was a very young child and is very acquainted to her social problems. This, along with his comical personality, is why he has some success in getting along with her, although that probably means that she hates him less than other people. In ME-Ch26, he was against giving the special AB Swords to Pray and Anne because he knows that Pray can't be trusted.

He was the adopted-father of Fion, Pray's first human friend. He also witnessed Pray giving birth to Anne, thus knowing Pray's origin as a Queen. However, he chose to hide the truth, believed that it was a miracle and helped Pray raise Anne. He asked his close friend Karen Mayer to adopt both Pray and Anne. Later, he was appointed as the knight-in-charge of Anne and Pray and took part in most of their battles until the other two officially became knights.

Although he is tone deaf, he tried a career in music by releasing an album called "Love Guru Milo" 9ME0-Ch6) though it only sold 100 copies. Anne participated in this by singing the chorus, however she suffered mental trauma for this and said she did it for the money.

There have been many hints that his power as a Knight was massive. In ME0-Ch13, Dein was commended as being stronger than Master Knights, yet it was said there was only a possibility that he would surpass Milo. Further, it is shown clearly that during the Battle of Velchees, Milo and Dry together set a record in taking down the army of High Rank Beasts while Pray and Anne fought the Cross Eyes.

Milo was the holder of Top Sword title before Pray. It is indicated that Milo is in the same generation with Kasim as they both took part in the battle with a Blue Flower a long time ago. He is also a close friend with Lime Zail, former Chief of Central Order and it is implied that they have feeling for each other. He is the representative of Ancient Church in Knight Order and part of the reserve force.

It was hinted in Fion's gravestone, which reads Fiona Leonhard, that Milo is potentially a member of the Leonhard Family. This was confirmed to be true in the Door Episode. 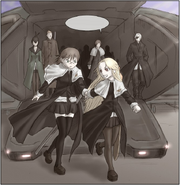 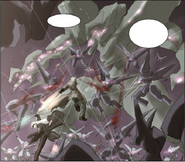