Knight Run (Korean: 나이트런) is a Korean webtoon series created and authored by Sungmin Kim (Korean: 김성민). It is considered to be under the space opera genre mixed with fantasy and tragedy elements.

Chapters of Knight Run are released on a weekly basis through the series' publisher, Naver. Official English translations are available through Naver's subsidiary and global platform, LINE. LINE also hosts unofficial fan translations of Knight Run in other languages such as Indonesian, Thai, Spanish, Vietnamese, and French. Aside from webtoon format, Knight Run is also published in print form.

Due to the ubiquitous number of notable character deaths, international fans of Knight Run often compare the series to the Game of Thrones franchise. Fans also draw parallels between Knight Run's Beasts with that of Muv-Luv's BETA monsters as both feature humanity trapped in a fraught situation against alien invaders.

Humans have expanded their civilization from Planet Earth and the Sol System to every frontier imaginable in the universe. Constraints in space travel have been conquered through technological advancement leading to the creation of the Warp Gates and the Black Hole Engine. The human colonization of space then followed along with mass emigration through the use of warp gate and starships equipped with black hole engines - the typical characterization of the Space Age.

Soon after, socio-economic and political differences fractured humanity into several competing polities. The government of Earth, citing itself as the home world, tried to reassert its authority over all of humanity but those in the far flung regions of space refused to recognize "foreign" rule. On the other hand, the spaceborne humans identified themselves as uniquely different from their Earth-bound counterparts. The Human Civil War then ensued. After years of fighting, humanity has coalesced into five main factions: Earth, Neoanthropinae Revolutionary Alliance, Ruin, Human Alliance, and Innovation Empire. These factions were at a state of perpetual warfare against each other but their conflict also propelled progress in science, engineering, and technology.

In CC 123, High Rank Beasts appeared which sparked the Human-Beast conflict that continues to this day, spanning three centuries already. Humanity has previously overlooked the beasts despite their heightened aggression because they were a very weak species. However, the beasts possess rapid evolutionary traits and were able to gradually strengthen themselves. This unexpected turnaround overwhelmed the five great human factions who still maintained inter-faction hostilities despite the beast invasions. Whole sectors of inhabited human worlds were eroded while the military forces of the five factions dwindled in size and strength.

To prevent the encroaching beasts from getting any nearer, Earth decided to cut themselves off from the rest of the universe by isolating Sol System and other neighboring galaxies. Meanwhile, the rest of the factions out in space collapsed under successive beast invasions. The survivors were then forced to band together to create a unified front that successfully staved off their extermination. Nonetheless, the situation remained grim and desperate with no definite end in sight.

"Cosmic Century 430. Interstellar travelling is now possible. Humans are travelling between the stars, pioneering new territory...Humanity is fighting against monsters." [1]

Knight Run primarily follows the life of Anne Mayer, a previously distinguished Knight who is now more concerned with retirement. Anne had grown exhausted of being constantly involved in conflicts and exposed to dangers. Though she is disillusioned from the glories of being a Knight, she still strives to keep up with her ideals which centers around saving everyone. She is branded as psychotic, masochist, and someone with a savior complex but overall maintains a reputation of being one of the best Knights in terms of both fighting prowess and dedication.

The story starts in the final stages of the Battle of Void. In her last mission before retirement, Anne initially participates as a military adviser only but as the battle unfolds, it soon dawns on her that she needs to go back to fighting. Anne then reluctantly heads to the front lines once more to bring a swift end to the battle and return the peaceful lives of Planet Void's people. Ultimately, Anne succeeds in taking down Beast Queen D-38 and the planet is soon cleansed of remaining beasts. The scene then shifts to a flashback of Anne when she was a Knight Trainee, revealing her close intimacy with Pray Mayer, her partner and sister. The flashback also reveals several aspects of the series' background setting.

Back in the present, Anne talks to Jill McKellen, a former classmate, while readying for her retirement party in Planet Valtia. Jill tells her that everyone is already anticipating her return to Planet Arin, their home world. The conversation hints of a traumatic past incident involving Pray which led to a falling out. It also forebodes of an impending tragedy. At Anne's retirement party, she is greeted by several dignitaries including Dry Leonhard, Daniel Leonhard, Leo, Dr. Thor, and A-10. They recounted Anne's heroism and her feats during the epic Battle of Velchees.

The political and military situation was also explained through various discussions between the characters, for the reader's convenience. The Knight Order and AE have clashing interests but committed to non-hostilities for the sake of defeating the beasts and ensuring humanity's survival. However, with the waning of beast threats and the fortification of the Absolute Defense Line, the Age of Humans finally came. Without a common external enemy to fight, Knight Order and AE are now expecting to directly go into conflict for universal, supreme leadership.

After the party, Anne made her way to the spaceport filled with excitement of finally reuniting with Pray but she was stopped before boarding the terminal at the last second. An emergency announcement declares all travels to Arin are suspended until further notice. Military personnel then appeared to serve Anne a summons order of the utmost priority. They bear shocking news: Arin, the de facto capital of humanity and its final, most powerful bastion, has fallen to the beasts. The War of Prayer then begins as the rest of the story unfolds.

Little by little, Anne and Pray's tumultuous relationship is further revealed. Anne would now have to face her inner demons as well as the ghosts of past sins that have come to haunt her while dragging the rest of the universe. Caught between her duties, guilt, and emotions, she must choose who will she save - the fate of humanity or Pray, her most loved one?

Knight Run has featured a lot of characters in each of its episodes. The following characters are widely considered to be the series' main cast and have made recurring appearances in more than one episode (if not all):

The Knight Run series is divided into several volumes, colloquially known as "Episodes", that narrate the plot in a successive linear manner. Episodes are further subdivided into the "Main Episodes" and the "Another Episodes". Main Episodes deal with the main plot narrative (centered on Anne Mayer) while the Another Episodes are spin-offs that explore various subplots. Additionally, there are "Opening Episodes" and "Extra Episodes" which serve as prologues/epilogues.

The following are selected cover arts from certain episodes: 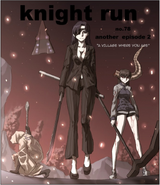